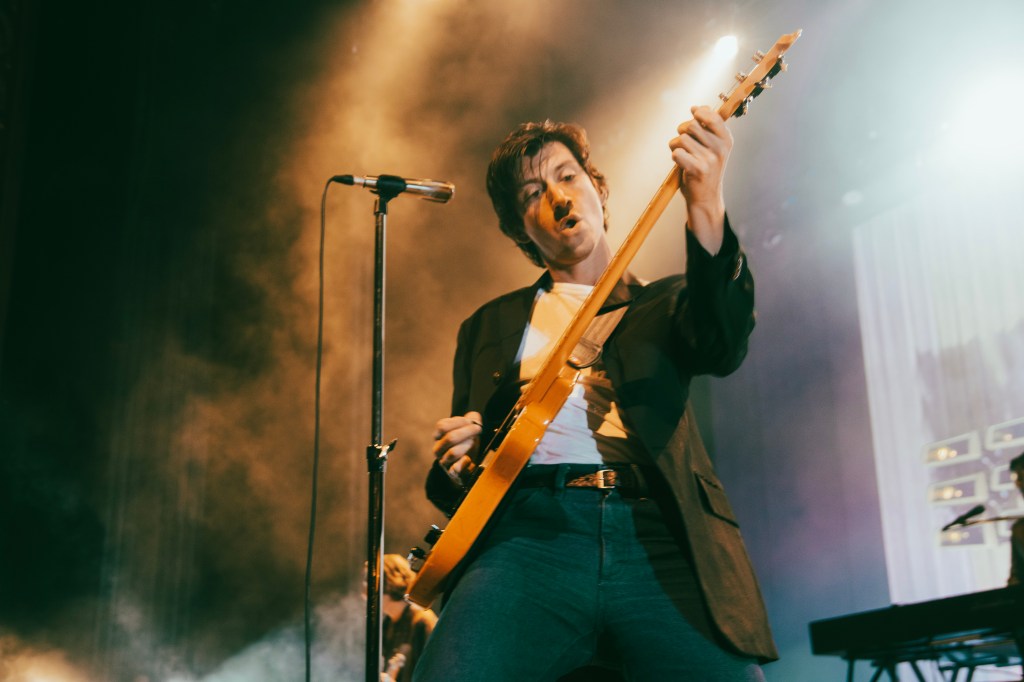 When the Arctic Monkeys waltzed onstage at Brooklyn’s Kings Theater on Thursday night, they were greeted with such enthusiastic applause and overwhelming cheers that when Alex Turner sat down at the piano and sang “Don’t Get Emotional,” it was as if he was speaking directly. to the audience

While the band opened the show with new single “There’d Better Be a Mirrorball,” which came out just a few weeks ago, the crowd embraced it as an old classic. As Turner sang the title song one last time, in falsetto, a giant disco ball descended from the ceiling, lighting up the lush Kings Theatre.

To be clear: there is a good reason for Monkeymania. Thursday’s show marked the band’s first headlining concert in the US since 2018, and though their seminal album “AM” came out almost a decade ago (feeling old?), Turner’s thirst for the Tumblr era is still very much alive. The audience erupted in whoops at the frontman’s every move, cheering when he ditched his guitar for “Why Did You Only Call Me When You’re High?”, when he raised the microphone stand above his head during “Arabella,” and of course. of course, when he’d growl between songs, “How’s everybody?” in a British accent thicker than the bass tone of “Crying Lightning.”

“AM” featured generously in this setlist, with the band playing six of the album’s twelve tracks. And while more of the band’s early tracks could have been a boon (perhaps “Fake Tales of San Francisco,” “A Certain Romance,” or “Fluorescent Adolescent”), the tracks from 2013 seemed to sound stronger than ever. The band is still finding ways to spice up “Do I Wanna Know?”, which has clearly reached the elite level of rock songs whose riffs alone have become stadium songs. Filled with sultry harmonies and a soaring guitar riff, “Arabella” elicited visceral emotion from the crowd, with Turner carefully enunciating, “Arabella’s got some interstellar alligator boots.” He wants you to listen to every syllable of it. During “RU Mine?”, Turner took a long pause, basking in the audience’s anticipation before unleashing her final explosive chorus: “In my mind, when she’s not right there side next to me / I going crazy!”

“AM” feels like the clear divider between the shaggy-haired Sheffield boys who electrified 1920s British festivals and the suave, slicked-back greasers who dominated the 2010s alternative boom. the foundations for the more mature sound reflected in the glitzy, piano-heavy singers on “Tranquility Base Hotel and Casino” and what we’ve heard so far from “The Car,” which opens October 10. 21. Along with “Mirrorball,” Turner and company played three songs from the upcoming album: the steamy “Body Paint,” wah-pedal “I Ain’t Quite Where I Think I Am,” and “Mr. Schwartz.”

“If you’re thinking of me / I’m probably thinking of you,” Turner trilled on “Body Paint,” before floating into a space guitar collapse. Mandatory Yondr bags meant phones and video recordings weren’t allowed on the show (even though it was professionally filmed), so fans will have a hard time finding footage of the new songs online. Rest assured, they sound on par with “Tranquility Base” and lead single “Mirrorball,” trading punk energy and catchy hooks for the band’s new retro, almost psychedelic lounge vibe. The new cuts are romantic and mysterious, sometimes even creepy.

Despite playing at a slightly slower pace, early catalog favorites “From the Ritz to the Rubble” and “I Bet You Look Good on the Dancefloor” still blew the roof off, and “Humbug” fans must have been pleased to hear “Pretty Visitors” and “Potion Getting Closer.” With an eight-piece band and additional guitar, synth, and percussion backing, the soulful “Brianstorm” sent ripples through the Kings Theatre, and the songs from “Tranquility Base” they sounded even more intoxicating.

Kicking off a three-song encore with “Mr. Schwartz” and “Cornerstone”, Arctic Monkeys closed the show with the fan favorite “505”. The crowd swayed up and down during their buildup, but when Turner yelled, “I completely break down when you cry,” the pit actually transformed into a dance floor: a huge mirror ball glittering above.

copaganda In Crossbell's criminal justice system, people are represented by two separate but equally important groups: the police, who everyone hates, and the government, which...
Read more
GAMING

copaganda In Crossbell's criminal justice system, people are represented by two separate but equally important groups: the police, who everyone hates, and the government, which...
Read more

One of the essential parts of Dead By Daylight is the updates: the developers try to update the game and add new characters regularly....
Read more
Load more

When a young Rohingya woman landed in New York in 2018, she thought she had finally reached a safe place: the end of an...
Read more

Biden admin is way out of touch with crippling inflation

As if to emphasize that this riverside city of 1,200 has nothing in common with the royalty that once ruled in the eponymous location...
Read more

copaganda In Crossbell's criminal justice system, people are represented by two separate but equally important groups: the police, who everyone hates, and the government, which...
Read more